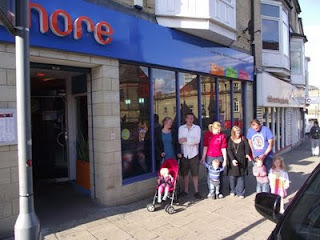 The Sir Titus Salt (a Weatherspoon’s Pub) behind the, what was, the Queens Hall was chosen for a pre curry drink. “Not another ‘Witherspoons’” I here you cry but, I’m afraid to say, my knowledge of Bradfordian hostelries is limited to say the least. However, I’m happy to go on record as saying the Sir Titus Salt must be the best Wetherspoon’s in the land. It is a spectacular building inside – harking back to Victorian times I would have thought. It also has a dedicated children’s room, which Izzy managed to make all her own after staring out a couple who were sat in there when we arrived – good girl.

Lahore had slipped below my radar, probably due to its geographical location - just below the Poly, nestled in a parade of what I thought were simple fast food takeaway’s. However, an esteemed member of the Bradford Curry Club drew my attention to the restaurant and, after a little t’interweb research it appeared it was going to be a little gem.

Having four young children in our party – although adding to a very enjoyable late afternoon curry eating experience – did hinder somewhat the analysis of every mouthful of yummy curry.

This is a very popular restaurant – even at early tea time – and got progressively busier, and did not disappoint. It’s all very trendy, dare I say funky, décor 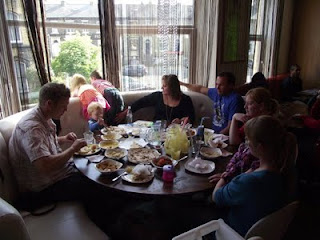 inside, with a spiral staircase joining the four floors. We were seated on a large round table nestled in a bay window on the second floor. The menu is very varied and includes pasta, burgers, paninis, cake, ice cream, etc, along with curry – but don’t let this put you off – there seems to be shift towards this kind of dining experience in Bradford. Akbars Café springs to mind.

Following the speedy dispatch of poppadoms etc, the mixed grill starters, of kebabs, lamb chops etc, were ace, and had a really BBQy flavor, suggesting being cooked over charcoal as opposed to inside the tandor. They were also of a high quality and fresh – oh and cheap. However, I opted for the Aloo Paratha, which was very nice in its own way, and tasted a little of cinnamon, but defo wasn’t a patch on the mixed grill. That’s not taking anything away from the paratha you understand. 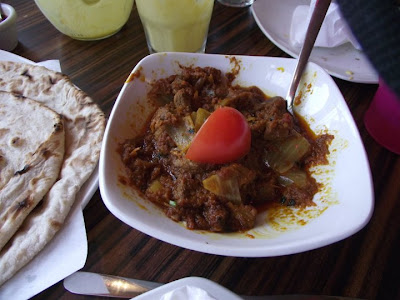 Meat Dopiaza was chosen as my main and it was pretty tasty stuff really. The meat was of good quality and the gravy rich and gloopy – I polished every last morsel off. The obligatory garlic naan was also ordered and had huge dollops of raw garlic smeared on top – Top draw as far as I’m concerned.

I didn’t hear any complaints from the kids re their korma either. However, my 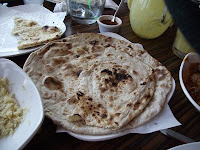 little one had managed to fill herself up on lassi and poppadoms, and didn’t really attack the korma with the usual gusto – lesson learnt there I feel?? However, she seemed to find room for ice cream?? Strange that??

The above was lubricated down the neck hole with a couple of jugs of Lassi and water – no booze here I’m afraid. 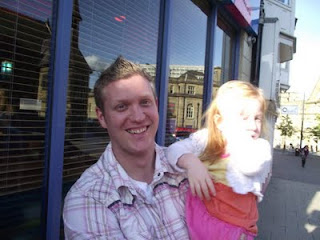 The chargrilled mixed grill starters. Other ‘From the Grill’ offerings were available, and I think maybe the place to head on any following visits.

Non really. No booze I suppose is a bit of an issue, for me any road, especially if you’re ‘out out’.

The total bill for six adults and five babies came to about £90 inc. tip. Pretty reasonably I think? But, of course, this is without drinks.

All fit and healthy the following day.