Aagrah has about 15 restaurants spread across Yorkshire.  It not only specialises in great cooking but does corporate type stuff, and also has an Events Catering Division.  It was this aspect of the Aagrah empire we were to sample recently.  This opportunity was going to present some interesting questions with respect to the balance between providing quality food, and enough menu choice to the masses. 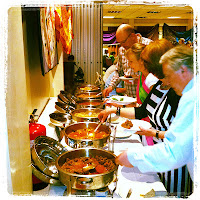 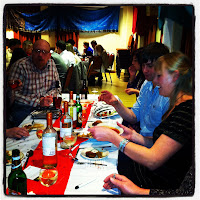 The Event Catering was sampled at a Bollywood themed fund raising do I was lucky enough to be invited to, at the Clarke Foley Center in Ilkley. The do was organised by the family of an esteemed member of the Bradford Curry Club, and featured Indian dancing demonstrations, raffle, quiz etc, but for me the main attraction to the event was the the food supplied by Aagrah's Event Catering division. 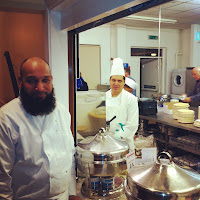 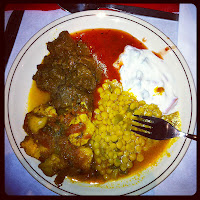 The format was similar to some restaurant buffets with starters - which included chicken tikka, samosa's and pakoras - delivered to your table and main courses presented buffet style in large self service urns.

The fair was pretty good for this kind of mass catering type thing.  All kind of middle of the road, but high quality and tasty non the less.  Ideal really.  The starters had become a little tepid and flaccid, suggesting they had been kept warm for some time, but tasty enough all the same.  For me the Lamb Achari was the stand out dish.  Very meaty with the slightly sour taste from the added pickle was excellent.  It is a dish that I would likely order in the future in the restaurant. 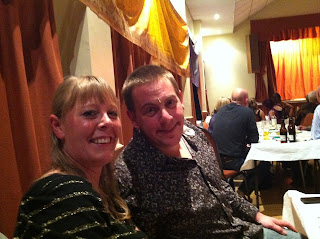 I'm not a big fan of this style of dining to be honest - ie buffets.  I think it's been mentioned on this blog before I'm sure?  However, I thought Aagrah did an alright job.  It's difficult to pitch the food right for everyone I know, and I think ultimately it's this 'middle of the road' aspect that is just a little hum drum and lacking in sparkly that you get from a fresh sizzling spitting curry.  If I was to ever have the opportunity to organise such and event I would consider Aagrah.
Posted by Unknown at 12:23