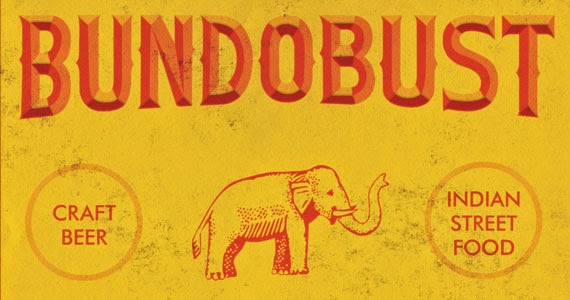 A rare night out for me and the Mrs - to see bands just like the olden days - and we needed a bit of something to eat prior to vino frenzy, so Bundobust street fodder was just the ticket.

The excitement - well my excitement - around Bundobust has been rumbling on now for some 18 months or so, and from nothing more than rumours on the internet, and humble beginnings as 'pop up' purveyors (all here), Bundobust is now established as one of the coolest and trendiest bars/eateries in Leeds. 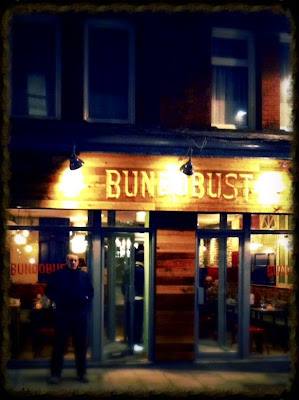 And cool and trendy it is indeed. Indian influenced wiring dangles exposed light bulbs from the ceilings, and ramshackle wall furniture made from old doors, are, I guess supposed to be reminiscent of some Mumbai slum or other. Bundobust is positioned in the bottom(ish) part of town, near the train station which, perhaps, is not historically one of the most salubrious areas of town, but is now much improved, and close to the new Trinity Centre, and also the likes of Laynes Espresso and Friends of Ham.  It's a part of town much improved recently and on the up and up.

Born from a collaboration of the Sparrow Bier Cafe and Prashad, both Bradford institutions, Bundobust was set to be a winner.  I'd say it's more bar than restaurant, but they have stuck to their guns and deliver Indian inspired street food. All presented in little paper bowls.

The menu is a fairly stripped down affair, of about twelve street food dishes, ranging in price from £2.50, for spicy nuts, all the way up to £6/pot for the likes of Dosa (stuffed pancakes) and Idli Sambhar (rice dumplings).  Then there is a rather healthy craft beer, wine and cocktails menu also. Indeed, far more extensive than the food menu.

We went for Bundo Chaat (£4), Onion Gobi Bhaji Bhaji (£4) and Masala Dosa (£6)... all to share... and with the bottle of house wine (£17) it all came to £31!  Now, to Bradford Curry standards this is pretty dear - and we are well in hearty snack territory here rather than gut busting belly buster fill up! But we have to put things into context I guess - for middle of Leeds prices it isn't bad.  And you get the swish environs, town centre location, hipster crowd and groovy funky music.  Typical Leeds night out kind of vibe.  So, I can handle the price, and I can handle the economic portion sizes.... but... BUT... only if it tastes good.


From experiencing the pop ups I was confident the quality would be there. And it was.

The Onion Gobi Bhaji Bhaji was billed at the 'Ultimate Bhaji', of onion, cauliflower and spinach, and was served in the papery bowl, on top of a descent smear fiery and sweet chutney.  Essentially a very good bhaji. Three crispy balls, which were just about worthy of two bites each, relenting to soft fully innards. A full flavour provided by the mix of onions with the cauli. and spinach was rather satisfying.  In addition, there was some spice and fire, but was unsure if it originated from the chutney of from the bhaji itself? 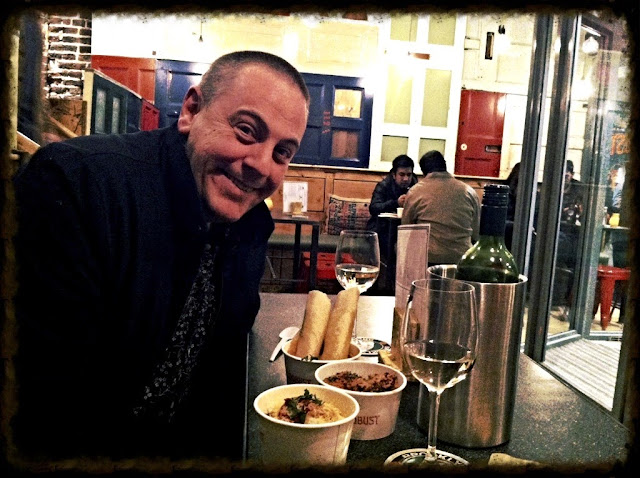 On to the Masala Dosa.  The two small rolls in a paper cup presentation was certainly more quirky the more traditional large plate filling dosa I am more familiar with. However, that is by the by really and, with all things being equal, the flavour of these finger food Dosa's (Dosii??) was there.  The Dosa's were sat end on in the tub and were actually sat in the thin lentil soup sic (sambar) and this provided the only bugbear really - the dosa ends began to dissolve in the sambar!  It ended up becoming a bit messy!  However, all the hallmark slightly sour flavours from the fermented batter used for the dosa itself, the spicy sambar, and the cooling coconut chutney were present.  So great all round... except for the slightly soggy ends! 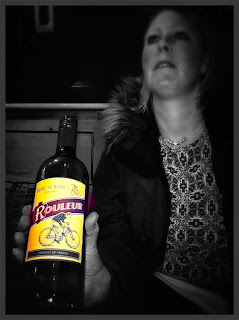 Finally we come to the Bundo Chaat.  We thought this was the stand out dish of the trio we tried.  Crunchy samosa pastry with chickpeas and potatoes, then smothered in tamarind and yoghurt.  An explosion of flavours with every mouthful with the sour tamarind tamed by the soothing yoghurt.  Then crunch from the pastry and substance from the chickpeas.  Yes, very yummy.

We thoroughly enjoyed out first proper Bundobust experience.  It really is a cool kind of place and location, and provides a unique eating experience. We will visit more often for a relaxing drinks and snacks.
Posted by Unknown at 22:30