With Awadh being a little off the beaten track, what with being right up Manchester Road, it had falling below the radar somewhat, and my expectations were of indifference really.  However, the restaurant had been spotted during Bradford Curry recon trips, and through various internet searches, and was deemed suitable to receive a Bradford Curry Club visit... During National Curry Week too - what could be better?

Perusal of the on-line menu increased my expectations with the fact that award winning chef Zahir Khan was formerly Executive Chef for Sheraton Hotels in India, and also with Gordon Ramsey name drops.  I'm such a snob!

Our sensations endured on the dank and miserably chilly evening outside, were emulated, some what unfortunately, once inside Awadh, with our first impressions of the restaurant being similar!  The restaurant is approached from a spooky rear car park to a side door.  From here, a flight of stairs are climbed up to a sticky door - that needed quite a shove to open - before entering the first floor restaurant.  The decor was a tad tired, and reminiscent of maybe a previous Italian Restaurant incarnation?  All kind of terracotta in colour and with areas of polystyrene brick clad walls. There was also a strange fake rock cliff feature in one corner!  Anecdotal evidence suggests it was formerly Fryer Tucks Fish n Chip restaurant - of which the takeaway is still operational beneath.  However, the overwhelming sensation was one of cold!  Lynda dare not even take her coat off!  A few tables were taken, but the place was far from buzzing, and seemed a little atmosphereless.

We were initially seated in a lounge area, were given menus, and drink orders were taken.  A large bottle of Cobra for me.  The menu read amazingly well, and was essentially all Specials split into geographical sub menus of north, south east and west.  Very clever.  All the 'old favorites' and mild/European dishes were relegated to the back page.  In addition to the menu was a chalk board of daily specials, which was a nice touch.

Both Lynda and I spotted the Achari Paneer Tikka, on the Northern Menu, straight away, and it promised home made cottage cheese steeped in spices and finished in the tandoor  but she bagged it first.  Therefore, I plumped for Dhungar Maans Ke Sulle, from the Western Menu, which were grilled, spiced and smoked lamb scallops from the Rajasthan region. 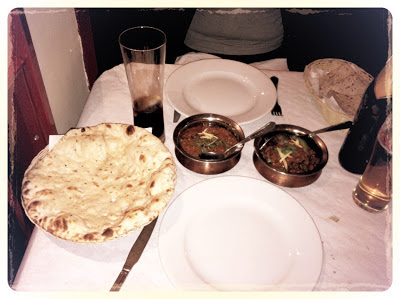 The Acharia Paneer Tikka was fantastic.  Two large cubes removed from a skewer with peppers, onions, etc.  The Paneer was soft and actually tasted cheesy  and was a far cry from the small, squeaky and flavourless chunks often served.  The spicing was subtle -  perhaps too subtle, but, on the other hand,  I guess just right not to mask the flavour of the Paneer.  I feel to cover the flavor of the actual cheese would have been a crime in this instance.  The Dhungar Maans Ke Sulle was much like a sizzling lamb chop dish, without the bones - lamb scallops seem to be the eye of meat from a chop - and were pretty good.  A touch on the dry side with a prominent taste of ginger, and a fair old kick, are my lasting thoughts.

For mains we both selected from the Northern Menu.  Lynda the Khan's Special Khorma, and me Lamb Chops Punjabi.  The special Khorma - Chef Gordon's (Ramsey?) favourite apparently - was slow cooked lamb shoulder in brown onion, garlic, ginger and spices... oh and a LOT of oil/ghee. Poor Lynda went a little green when it arrived.  Taste wise is was good - Lynda commented so - with a deep dark sweet flavour.  The meat had almost disintegrated into the loose sauce, forming a fairly smooth homogeneous mass, but it was difficult to see past the copious amounts of oil.  My Lamb Chops Punjabi was certainly better on the oil front, but to the layman both dishes looked pretty much the same - except mine had bones sticking out of it.  My dish did taste different though, and suggested that appearances are deceiving sometimes.  It was billed as char-grilled chops, tossed in onion, garlic, tomato, ginger and kahari masala, and I liked it a great deal - it was finger/rib bone licking, lip smacking fun to eat. Our accompanying garlic naan and chappati's were pretty bog standard, so nothing much to discuss.  However, after ordering I did spot a garlic, coriander and chili naan, on the Specials Board, which I wished ordered instead - oh well.

A full range of beers and wines are available, along with softies of course, but only Fosters is on tap.  Cobra and Kingfisher are by the bottle.


The Achari Paneer Tikka was head and shoulders the stand out moment of the evening.  Light subtly spiced and tandoored cheese was exquisite to eat.  Next would have been my Lamb Chops Punjabi - it was an overall decent dish.

The generally cold restaurant and out of place decor lacked a welcoming feel.  Lynda found her curry oily - which it was - but overall we thought the food was good.
﻿
﻿

Dear!  £43.  However, the biggest problem with the price, which I've just noticed while re visiting the menu whilst writing this, is that I think we were charged more for for everything than was printed on the menu!  For example, both our mains were listed on the menu as £7.50 each, but we were charged £8.50?  I have thrown the bill away but I pretty sure this was the case with everything we ordered. Surely, price increases can't be implemented until a menu re-print has been undertaken?  I wished I'd been more switched on during the evening.  We feel a little miffed at that to be honest.

Nothing fun, just home to bed.  Not wanting to be overly graphic, but we were a little 'windy' the day after.  However, the real aftershock is just the niggling 'being charged more than the menu price', that has cast a shadow over proceedings.

Well, Awadh certainly are trying to push the boundaries of your average Bradford Curry, and are doing things a little differently.  I liked the north, south, east and west menu's, and overall the food was very good, if locally a little oily. Apart from the slightly bleak atmosphere in the restaurant, Awadh is all round pretty good.  If it was on my door step, I would go most weekends I'm sure.  However, for me, I don't think it quite has the attraction to pull me so far from the town centre on a regular basis, but certainly every so often, I will be a repeat visitor.
Posted by Unknown at 11:13