For 2012, the World Curry Festival was to roll into, surely it's spiritual home, Bradford.  And to the recently unveiled and excellent City Park.  The Park provided a brill location for the Festival, and I thought a vast improvement on last years Leeds city center venue.  Here there was room to move, peruse the stalls, and also plenty of safe space for the children to scamp about, and get wet through with gay abandon.


Alas, this year, due to other commitments, we didn't get chance to visit the festival until late Sunday afternoon.   When we arrived there was still loads of people milling about, and some lengthy queues at the stalls.  However, the rain soon came and, by about 14:30, most of the lingering folk had started to depart, and the atmosphere some what went with them.  Rain and cold, and no people resulted in some of the stalls calling it a draw and shutting up shop.  I understand the festival was due to shut up shop about 4pm anyway.

Therefore, we made it our mission to make sure we sampled all we wanted to before being turfed out. 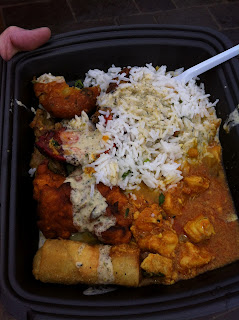 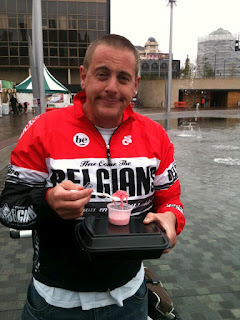 First up was Street, from Huddersfield.  They were offering a 3 course meal in a box for £5!  Sounded too good to miss really.  In my box was Spud Scallop, Channa Chaat Spring Roll, Chip Shop Fish (??), Seek Kebab, Tandori Roasted Wings, Chicken Karahi, Creamed Daal, rice and puri.  Also an afters of Falooda was included.  Sounds like quite a feast, and it was.  A bit cool, but all excellent.  I felt a little underwhelmed with the potato scallop, and the Fish Shop Fish (which was just like (nice) Fish Shop Fish - fine on a Friday, but not what I was expecting at a Curry Festival?).  The chicken Karahi was a little watery, but was tasty enough.  The highlight was the Falooda.  Not something I've had before, and was a sort of pink, sweet, noodle, soup.  Quite irresistible.


With many places starting to pack up, Lahori - not sure where they are based - started doing a roaring trade.  I went for Samosa Chaat to start with, before moving onto a Seekh Kebab wrap.  Thew Samosa Chaat was OK I suppose.  It was a bit dry, and lacked a bit of punch.  The chickpeas were a touch 'loose' and firm, and the dish just lack a bit of punch.  The Wrap on the other hand was good.  Cooked on the grill in front of you fresh kebabs were meaty, firey and well seasoned.  All wrapped up with sauce and salad made for a tasty snack 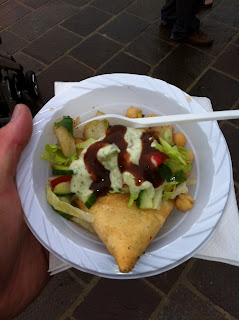 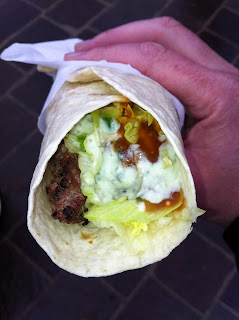 Just time for a quick nosy around the theater.  Some bloke was doing a demo and cooking Fish Karahi I think.  We were all cold, wet and tired by now, so we headed for home. 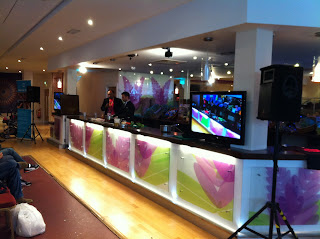 I wished we'd made it to the festival a little earlier on in the weekend, when perhaps a little more enthusiasm and atmosphere may have been apparent.  I got the impression a very busy weekend had been had though, and loved the venue.  I'll be back next year, that's for sure.
Posted by Unknown at 20:56