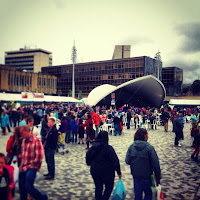 The 2013 World Curry Festival returned to City Park, Bradford, and the whole shebang has got bigger!

A similar set up to last year is as much as stall holders occupy the periphery of the park, with picnic tables and chairs in the middle.  Different from last year was the addition of a large out door theatre - very posh - as opposed to the stage set up in a vacant unit of Centenary Squarer.  This gave the proceedings a much more cohesive feel I thought, and also looked darn impressive.  Also a very good programme was produced for this years event, including some yummy sounding recipes to try yourself.

Due to my hectic diary - always the same at this time of year - I was on a flying visit.  First impressions were of busyness!  Excellent to see so many people supporting the Festival but, from a purely selfish point of view, the prospect of joining some of the vendor queues snaking their ways around the Festival site, seemed daunting!  However, once a few minutes had been spent wandering around, it became clear there were 'popular' stalls, and some perhaps less so? 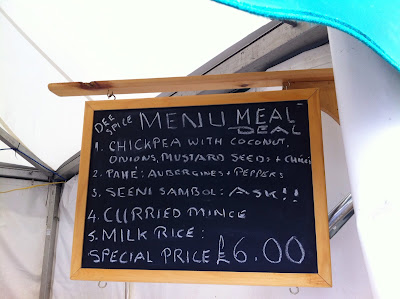 With this in mind, nestled away was Deespice, and promised Sri Lankan fodder.  Not much Sri Lankan cuisine around these parts I thought so seemed like the perfect opportunity to try something new.  And, to be honest, looking around some of the other stalls, there are only so many Chicken Tikka Wraps you can eat.

So to Deespice it was.  The stall holders were very friendly and offered a 'Festival Special' for £6.  The Special comprised essentially a number of taster portions on a plate, the main draw I guess being Seeni Sambol.  The Seeni Sambol was a very rich dark curry with dried fish.  It was sweet - almost like a chutney - with a sauce comprising abundant onions, which must have been cooked and cooked and cooked, to produce the rich flavour.  The fish appeared to have almost disintegrated into the sauce, providing a quite strong fishy taste, and it was also pretty hot!  The dish was quite different and quite delightful.  Worth seeking out I promise, but I understand Sri Lankan food difficult to come by up north.  The Sambol was served on a bed of very sticky coconut rice - referred to as Milk Rice - and provided the perfect cooling accompaniment to the spicy Sambol.  With all the excitement, the addition tasters on the platter went a little by the by.  I don't think I even noticed the curried mince!  Likewise the aubergines and peppers!  The chickpea with coconut, onions etc was a refreshing little side garnish/salad an offered texture, zing and freshness to the sweet and spicy Sambol.  I enjoyed the whole plate of food and was pleasantly full afterwards.

However, there was still room for a trip to the Falooda stall.  I'm not quite sure what Falooda is but it's like a dessert/beverage comprising noodles with thin pink milky sauce, basil seeds(??) and a blob of ice cream.  It sort of resembles a Tauntauns giblets! It has a unique taste (in a good way) which is difficult for me to put my finger on, is not overly sweet and is very refreshing.

So that was it - I hit the road.  Another very excellent and seemingly very successful World Curry Festival.  One observation I made was that all the stalls seemed to have 'Festival Specials' on for £5/£6 and seemed to all provide a substantial meal.  Now, that might prove good value but, if like me, you'd like to trawl all the stalls and sample a bit of everything, you were a little short on option.

Overall excellent day out and really worth a trip next year.
Posted by Unknown at 16:48