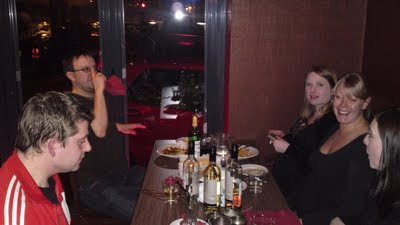 The newly refurbished Habib’s promised so much. The new decor as super trendy type of place, in the same mould as the Akbar’s of this world, did look very inviting, and it was very busy, but the food just didn’t live up to the hype.

Because the restaurant was so busy, usually a good sign, we had to wait for about 30mins - but that was our fault for not booking. But no bar meant the wait did seem like quite a long time, however. To his credit, the waiter was informative and kept us posted with developments as we waited.

It was clear that the restaurant was geared up to delivering the mega buffet, that seemed to occupy about 1/3 of the floor space, but we were given menus also, to peruse as we waited. Once seated, we were offered popadoms which promptly arrived. However, we later found out that they cost nearly £6! For about 10 popadoms and a pretty poor pickle tray that seemed to consist of mint sauce (like ‘roast lamb’ mint sauce mixed with yoghurt) and something that tasted of tommy sauce!!!

Some members initially were wise to be suspicious of the buffet, and to push for ordering off the menu. However, a very pushy waiter, who clearly wanted an easy evening, and some club members deciding that the buffet was probably the best and easiest option, meant we all ended up choosing the buffet option. On the plus side, the buffet did have a dedicated grill man who was churning out tikka and the like. So that was nice, and was the best part of the starters. The fish pakora was also good. Everything else was pretty poor. A seeming good selection of mains was met with half empty, often very oily, terrines of... of....hhmmmm?? Slop basically. I didn’t feel inspired to do far seconds, and required a zantac on my way home even!!! Actually, the chana masala was pretty nice.

So, still not a huge buffet fan. I shouldn’t have been so lazy and taken the easy buffet option. I shall be stronger next time.

This negativity is probably related to the buffet style of eating rather than a reflection of Habib’s itself. However, it is going to be hard to re visit in the future to see. Never mind.