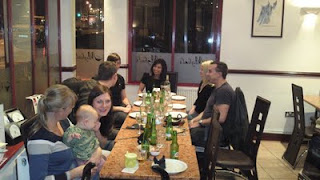 First thing first – it’s great to be back on the road again, it has to be said.

Picking up where we left off - Mughals, we were supposed to visit Mughals way back in March remember, so it was nice to finally walk through the door and take a seat. Mughals, although not overly famous, does have a pretty good reputation, and is somewhere that has always looked appealing when driving past.

However, the décor is now looking a little tired, and could do with a spruce up, but it was clean enough and the full to bursting sweet counter did a roaring trade all night. The restaurant is pretty small and I would say our table of 13 took up approximately half the covers. The sweet counter must have taken up a large proportion of the floor space with a small open kitchen to the rear corner.

I not sure Mughals is that used to having large parties, and I think they were a little taken aback with a party of 10 adults and 3 babies turning up – although we didn’t book, we called the day before to say a large party was on it’s way.

Only one chef meant rather lengthy waits for food, but popadoms, with associated limited pickle tray, were brought straight to the table, and the BYO policy meant that boredom didn’t take hold. Another strange thing to be told by the waiter was that the onion bhaji was off? Plenty of onions but no bhaji mix apparently??? Quite odd to say the least and I had to settle on mushroom bhaji instead. They were OK but nothing special, and it has to be assumed that the starters were pre made and simply heated/microwaved to order. Another starter mix up was a meat samosa being served to a vegetarian!! Oopppsss!!! 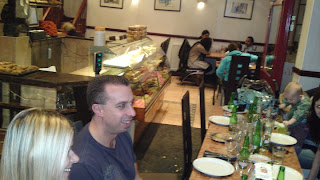 So, not a great start. The mains, for me at least, were another story. My Chicken Tikka Kahari was great – perhaps a little salty – but really rich and tasty, and the chicken had crispy bits on the outside suggesting it’d come straight from the tandor. It was served in a sizzling hot balti dish and was the kind of curry I could eat all day long. Perhaps the salt content took its toll, however, and I spent the entire night gagging with thirst and unable to sleep!! The wine and Stella Artois probably didn’t help there though. I paired my curry with a garlic nann and was pretty standard.

Following the meal, although by this time pretty full, sweets could not be resisted and a selection was picked and sampled. Phew, sugar over load!! Although I’ve had Indian sweets before, I am still always taken by surprise by the sweetness. Pick of the bunch for me was a condensed milky one with walnuts in. All the sweets were nice and fresh and seem to have a fast turn over.

I think with the babies in tow, it was a demanding night for the staff and I was happy with the service all in all and the experience in general. They were happy to package orders up, squeezed in a quick korma for Lilly and Dan because they were hungry, didn’t seem to worry about the mess my beautiful little daughter Izzy was making, etc.

I think I would return for the Chicken Tikka Kahari and sweets alone.