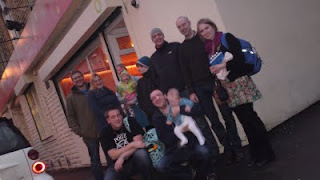 Well how things have changed in the space of a year. This time last year Prashad was a small café style restaurant and deli, serving up excellent quality vegetarian cuisine, tucked down a side street in Bradford. However, after their rollercoaster ride of reaching the final of Gordon Ramsay’s Best Restaurant TV competition, Prashad has now reached dizzying heights of popularity.

Our Prashad experience started the week prior to our visit, whilst booking the table. Even though our scheduled visit was a Thursday afternoon, I thought it would be best to book, or at least warn them of our impending arrival. I was surprised to be told that they were struggling for space but should be able to accommodate our 16 person party (14 adults and 2 babies – which seems like a lot of detail at the moment but will all become apparent). A further surprise was to be asked to pay a £5/head deposit – due to the size of the party – and that the deposit would be lost if any of the party dropped out!!! Not a brilliant start on the customer service front I thought – I have never been asked anywhere to leave a deposit before?? It became apparent during our conversation that the restaurant had been extended (into the deli it later turns out) and that we were effectively booking the full room. So £80 (16 people) paid up front.

So the day of our visit arrived and we all started to congregate at the restaurant. Prashad has also expanded across the road with the recent Prashad Lounge – a small room with, ‘front of house’ style counter, leather sofas and Gordon Ramsay’s TV programme on a loop. The poor boy working there said the constant airing of the telly programme was sending him mad – I can sympathise!! The Lounge is also decorated in News Paper cutting etc for you to read as you wait for your table.

Once your table is ready you are ushered across the road towards the restaurant. We were actually seated in the main (I say main but it is tiny) restaurant on two separate tables, as opposed to the large single table and own room as promised on the phone - but, nah to worry, we had lost some and gained some people from our party so ended up with twelve. 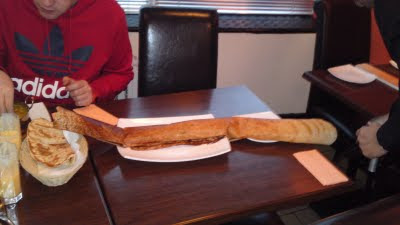 The food, as discussed here previously, was excellent. The Pethis (or ‘Award Winning Pethis’ as we were corrected by our waiter) were yummy and Lynda and I shared the Monster Dosa. It was massive – it must have been 1m long - and had to be carried out spanning two plates and positioned on an adjacent table. Not that size is everything mind, and dosa was well yummy.

On receipt of the bill we had prepared ourselves to loose £20 from the deposit for the people who’d dropped out, and only see a £60 deduction on the bill. But I thought some lee way would be accommodated and, considering we still brought a party of twelve and with the supposed ‘good customer service’ Prashad pride themselves on, I thought the full deposit would be honoured. How wrong I was, and I we were shocked to see only £50 of the deposit was deducted from the bill (6No. people less that the original booking)?? According to the waiter, no deposit would have been taken for the babies and, therefore, we were effectively six people down on the original booking. I explained what deposit I had paid, and it was a total, i.e. per head, etc, and asked to speak to the manager. The waiter disappeared into the back but returned with the same argument. Not one for confrontation myself, I simply shrugged it off. It was £10 (well £30!!) on a hefty bill - a total of nearly £200!! Although generally generous, no tip was left on this occasion, however, it didn’t seam appropriate.

So all in all the food is good but we did leave with a sour taste in our mouths and feeling rather ripped off to the tune of £30.

I would like to think I would return one day because the grub is so good, but I feel we received pretty bad service, bordering on day light robbery, and I think my hard earned cash is better spent elsewhere.