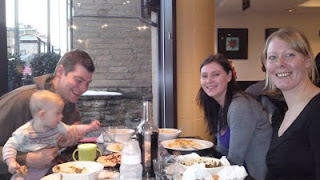 “Mumtaz has a little bit of a soft spot for Lynda and me - not 'coz of the quality of the food or anything - but because it was the location of one of our first dates. Years (and years....) ago, before Mumtaz wa the mega bling curry empire we see today, it was famous for having a menu where you bought your curry in either 1/2lb or 1lb portion sizes. Because of this we decided to visit. However, being poor students we didn't really consider the prices and, although not expensive, was still more than we could really afford, and, after reading the menu for 5 mins, had to make our excuses and sneak out. A bit embarrassing!! We popped down the road to the Kashmir instead.....Happy days.”

Well how times of change. Mumtaz is now massive – spread over two floors - and has all the usual glass frontage and stainless steel associated with the posher end of the Bradford curry schene. And even has a snazzy revolving sign outside and large Mumtaz engraved rock greeting you near the entrance. The vestibule houses a sweet counter and fridges/shelves stacked with all the Mumtaz branded ready meals, lassi, baby food, etc.

For what is, I guess, classed as a top end Bradford curry house, I thought the service was found slightly lacking. Although attentive to Izzy - she got a Mumtaz balloon, our waiter was a tad surly and forgot to bring requested water and also sort of threw cutlery into the middle of the table when asked for extras.

The pickle tray comes on a stainless tray with a sheet of paper identifying all the different cutneys. Novell I suppose, until it dawns on you that it is so you can make sure you buy a jar of your favourite on your way out!! The Plum chutney is pretty nice though it has to be said – really clovey.

Now onto the starter – Masala Fish – the best in the business I reckon, and is the only thing on the menu still sold by weight. Pricey but worth every penny. The vestibule area, mentioned above, also has a chilled fish counter with all the raw marinated fish on ice to veiw. I could eat it all day long and is probably only beaten by Kashmirs onion bahji – now that’s saying something. My dopiaza main course was a little bit of a let-down. Although you can specify mild/medium/hot, and my medium was nicely spiced, it was very oily – both to look at and taste - and generally a little bland. My garlic naan was nothing special and probably came out of one of the fridges in the entrance rather than from a raging tandoor??

So, I don’t think Mumtaz is ‘all that’. The branding can get a little tiresome, but the Masala Fish is a redeeming feature. As of yet they haven’t managed to stick it in a Mumtaz box and sell it to Morrison’s!!! And, until, they do, it will remain, for me, one of the best starters in Bradford.