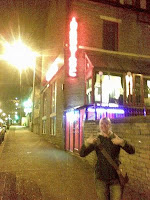 The International is a little just up the road from the mighty, and famous, Kashmir and is perhaps a little overlooked due to its geographical position. However, overlook The International at your peril, because here, I am pleased to report, the BCC has uncovered a little gem.

A full menu is available containing all the usual type of stuff. I chose from the specials list, the curry that was described with works such as ‘chilli’ and ‘garlic’. It certainly was garlicy, but not too hot. Nice. One issue was the amount of oil floating on top. I did have to sit my balti dish on its side to let the oil drain to one side. One good thing though was, having heard rumours of a ‘salty chef’; I was pleased to receive a perfectly seasoned dish. Chapatis were included with the main courses so I simple stuck with them, rather than ordering an additional garlic nann.

Before the mains we indulged in poppadoms and pickles, which were presented with the menus as soon as we sat down – top marks – along with a bottle opener too, for our beer (The International is a BYO), and a jug of iced water. A+++. For the starter proper, the table shared the mixed grill and some onion bhaji. There were both very good and tasty. The mixed grill included portions of fish. 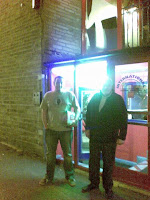 The decor is kind of basic but nice – plain tables and strangely coloured walls were the order of the day. It isn’t proper trendy or anything but is certainly a step up from the basic cafe style. The staff were excellent, and really friendly and attentive. A little too friendly maybe – at one point the waiter had his arm around Big Tone like a long lost friend!!! And it was handshakes all round when we left. The restaurant was really busy and had a good mix of clientèle – always a good sign.

All round it was pretty good and ‘another’ contender for best of the year. We need to go to some poor restaurants for a change. All these good restaurants month after month is making life difficult....It’s a hard life isn’t it?